from today film is dead

I distinctly remember the very real panic of the early ’90s (um, 1990’s, that is) when I was in Grad School and all anyone could talk about was the clearly imminent Death of Film. I was learning Photoshop 2.0 at the time, Postmodernism had led to Identity Politics, the “Y2K” was coming, and we were all doomed. I’m not saying that all that isn’t true, exactly, just not with the same clangor and wailing that seemed to come from all directions back then. We still have film, for now at least.

So here we are, today, back at the turn of the century. The time-traveling has begun, and this is my gift to the students, ca. 2002: 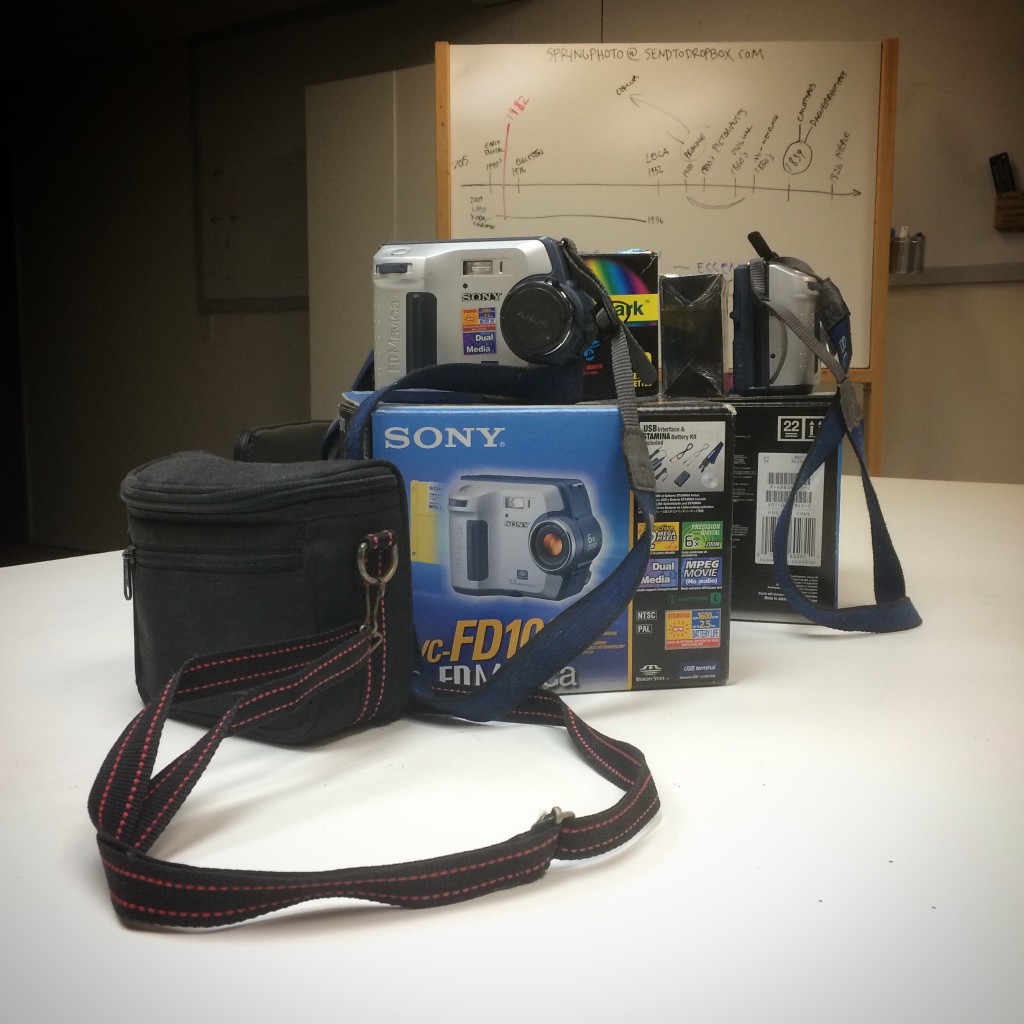 It was pretty exciting, actually, getting these beasts to work – 1.2 Megapixels! – scrolling through the sad built-in image effects, listening to the sounds of writing to a floppy disk. (It’s so satisfying a noise; why hasn’t that been co-opted for something, skeumorphically, as it were?) I had even brought an unopened box of floppies to use – and a USB floppy reader! I always say, Limits are good for Art. Let’s see what they can do with these.

The weather looks rainy all week, but just like yesterday, the morning gloom wore off (for the most part) after lunch, and everyone could go shoot. A few of the students got really excited about the cheap video included with the Mavicas, and spent some of the afternoon planning a quick horror-film shoot for tonight. (I overhead one say, “I want a bloody death.”) I may have been worried about the heady slowness of our beginning yesterday, but already the pace is picking up. Of course there are printer glitches, and Dropbox hangups, and small technological incompatibilities with these old cameras, but that’s digital technology for you – it just slows your whole life down.

Tomorrow we have our first Critique Day. We’ll look at the work from these first two days and each student’s previous work as a sort of introduction to what they want from these eight weeks. Let me end with a quote I gave them today, one I only recently saw online, and which may serve as our guiding principle for this whole class:

“Whatever you now find weird, ugly, uncomfortable and nasty about a new medium will surely become its signature. CD distortion, the jitteriness of digital video, the crap sound of 8-bit—all of these will be cherished and emulated as soon as they can be avoided. It’s the sound of failure: so much modern art is the sound of things going out of control, of a medium pushing to its limits and breaking apart. The distorted guitar sound is the sound of something too loud for the medium supposed to carry it. The blues singer with the cracked voice is the sound of an emotional cry too powerful for the throat that releases it. The excitement of grainy film, of bleached-out black and white, is the excitement of witnessing events too momentous for the medium assigned to record them.”
– Brian Eno, A Year With Swollen Appendices