I think it was dear ol’ Lara Meyerratken who first introduced me to Brian Eno and Peter Schmidt’s Oblique Strategies many years ago, which she would use to some effect to overcome her periodic songwriting struggles. A collection of “Over One Hundred Worthwhile Dilemmas”, the Strategies are short cryptic instructions, printed on cards to be drawn at random and used as solutions for overcoming creative blocks. I had an early web 1.0 version loaded on my Strawberry iMac, tho’ I can’t say I ever let their mysterious suggestions improve or alter my work at all. Just too stubborn I guess.

However, the more I teach, the more I find myself relying on a semi-regular set of instructions of my own, less oblique, perhaps, and a little more direct. Most of them are pretty obvious – like “Stop whining and get the fuck to work” – and one turns out to be identical to the first Oblique Strategy ever, which said “Honour thy error as a hidden intention.” Embracing your mistakes is always a good idea, and I often encourage students to put them up on the wall, or the web, or wherever someone (yourself included) might see it casually, or in passing. The lessons we can learn from failures are often best seen with new eyes, or someone else’s. Maybe it should just say 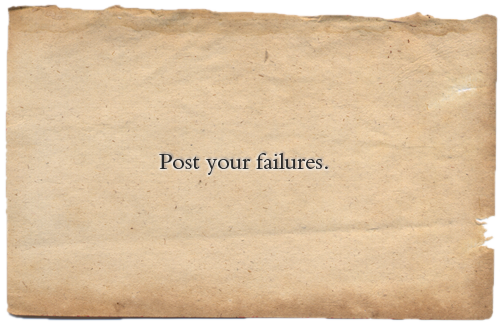 Anyway, the best and most useful one is what I’ve usually been calling “Driving into the skid,” by which I mean to go in the direction in which you’re being led. It’s really just a way of acknowledging the obvious, since it’s amazing how often we can’t see what’s right in front of us. Sometimes it’s just a matter of accepting that what you’re doing “for fun” is the real work. In other cases, it’s realizing that what seem like two different ideas or pieces are really answers to the same problem.

Last week I had two good examples of this on the same day. My former student (and friend and bartender and future tattooist) Sean Muller has been working in the back studio here since graduation, making his large-scale mixed-media photographs, covered with paint and text and scratches and cement. He’d ask me to come take a look and help him figure out what to do to escape his current block. I guess he was worried that the work was becoming stagnant, the imagery too similar, the hand-work a style. How could he push himself away from more of the same?

On the way out back, he casually remarked that the week’s heat had destroyed much of his undergraduate work, a whole pile of c-prints curled and melted and stuck together. He’d peeled apart a few of them to show me how fucked up they’d become and oh well… As we started to discuss the imagery of his large pieces – almost all of them vertically composed black-and-white pictures of churches and sacred architecture – I thought he should try something totally different just to see how his techniques would translate, what they would mean in a different format. Choosing images at random wasn’t necessarily the right solution, of course, so then what to do? I couldn’t help noticing how similar the textures of his painted pieces matched the damage on his old color work, pieces that once had meaning to him, now ruined. Et voilà! His new imagery could be… the old imagery.

Coincidentally, another former student was in town for a few days. Valentina Vella was a student from my last Concentration at Penland, who’s now in grad school in Chicago. Over an early evening martini at Brooklyn Social we spoke about her growing body of video and sound work, about Janet Cardiff and binaural recording, assignments in grad school and especially how tough it is to meet people in Chicago. New York gives us such easy access to a range of creative and interesting people, but Chicago just felt smaller and more self-selecting, I guess. Where were the interesting weirdos?

Valentina would soon have access to a good set of binaural microphones to use for recording her stories, and she was telling me the right way to use them. Janet Cardiff apparently uses a styrofoam head with microphones in it to get a more human stereo effect, although, as Valentina told me, “The best thing to record the way ears capture sound is to use actual ears. Someone else’s head.”

“Um, ok,” I said, “why don’t you just do that?” Find someone, anyone, and have them record the stories with their own ears. Post an ad on craigslist. Make it like a date – meet them at a coffeeshop first to weed out the psychos. Not only will the work sound better technically, it will benefit from the singular performance in front of an actual person. What’s more, I have no doubt there will be plenty of Interesting Weirdos… 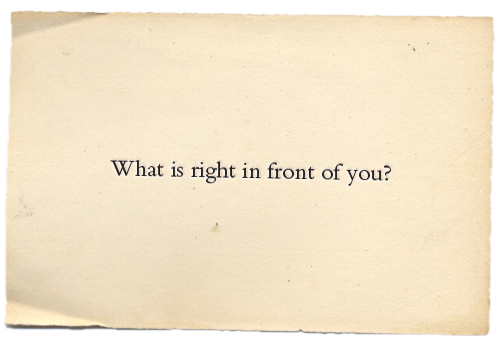