I am trying to finish editing a small piece I wrote about Photography and Failure, distilling some of the things I’ve been talking about with all sorts of people this year. Writing just seems to get harder and harder for me, though… As I study more Art History, Photography Theory and Contemporary Philosophy, I am being overwhelmed by jargon, and getting derailed on my mission – to write about Big Ideas in plain English.

It could be worse, of course. Over the years I’ve saved some examples of the worst kind of art-jargon, usually written by gallery flacks (although it could be the artists too – so many cannot write about what they do…) But just today I ran across this gem, for a show of an artist who does drawings and paintings that are very cute and, frankly, not too heady:

With “The Passengers,” Tina Berning continues to explore the relationships between conditioned aesthetics and supposed subjective ambition in the canon of contemporary visuals. The drawings formulate the artist’s own images of the human body, its inadequacy and its fundamental relation to self-determination.

Tina Berning releases figures out of their heteronomous, medial contexts and shifts them into an interplay between voyeurism and exhibitionism. She uses her paintings and drawings as carriers to extricate subjects from the contemporary alienated incapacitation. Codes and matrices blanket faces, streaks of colour lie like shadows over the delicate silhouettes. Interventions that follow Tina Berning’s study open the plainness of schemes into the ambiguity of expression. She makes subtle corrections to the standard, uniform face and figure, enabling a look of physical expressiveness to return. Even when they appear fragile and vulnerable, the faces and images of the people take on a form that is more resistive. 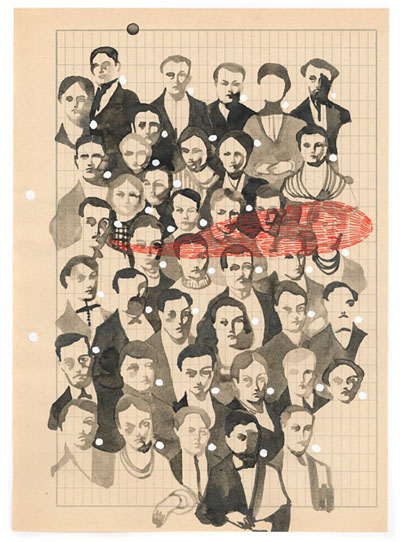 Now here’s an example of how to do it right, written by Sally Mann for her current show at Gagosian:

I am a woman who looks. Within traditional narratives, women who look, especially women who look unflinchingly at men, have been punished. Take poor Psyche, punished for all time for daring to lift the lantern to finally see her lover.

I can think of numberless males, from Bonnard to Callahan, who have photographed their lovers and spouses, but I am having trouble finding parallel examples among my sister photographers. The act of looking appraisingly at a man, making eye contact on the street, asking to photograph him, studying his body, has always been a brazen venture for a woman, though, for a man, these acts are commonplace, even expected.

I have looked hard at my husband since the first long strides he took into the room where I was languishing on a ratty chenille couch in some student apartment. My eyes fastened on him with bright interest, squinting to better get the measure of this tall man. Within six months, we were married. That was forty years ago, and almost the first thing I did was photograph him.

But that long history of picture-taking didn’t make it any easier to make the Proud Flesh photographs. Rhetorically circumnavigate it any way you will, but exploitation lies at the root of every interaction between photographer and subject, even forty years into it. Larry and I both understand how ethically complex and potent the act of making photographs is, how freighted with issues of honesty, responsibility, power, and complicity, and how so many good images come at the expense of the sitter, in one way or another.

These new images, we both knew, would come at his.

It is a testament to Larry’s tremendous dignity and strength that he allowed me to take the pictures that I did. The gods might reasonably have slapped this particular lantern out of my raised hand, for before me lay a man as naked and vulnerable as any wretch strung across the mythical, vulture-topped rock. At our ages, we are past the prime of life, given to sinew and sag, and Lorry bears, with his trademark god-like nobility, the further affliction of a late-onset muscular dystrophy. That he was so willing is both heartbreaking and terrifying at once.

Most of the pictures I take are of the things I love, the things that fascinate and compel me, but that doesn’t mean they are easy to look at or take. Like Flaubert, two things are sacred to me in my process: impiety and perfection – the former often hereditary, the latter always hard-won. Beyond the felicitous ”unifying accidents” that occasionally grace the work, making art requires tenacity, a temperament born of an ungodly cross between a hummingbird and a bulldozer, and, most of all, practice. Practice looking.

I look all the time, at the people and places I care about, and I look with both ardor and frank, aesthetic, cold appraisal. And I look with the passions of both eye and heart, but in that ardent heart, there must also be a splinter of ice.

And so it was with fire and ice, the studio woodstove too far away from the light to do him any good on a cold winter afternoon, that Larry and I began this work of exploring what it means to grow older, to let the sunshine full voluptuously on a still-beautiful form, and to spend quiet afternoons together again. No phone, no kids, two fingers of bourbon, the smell of the ether, the two of us – still in love, still at work.